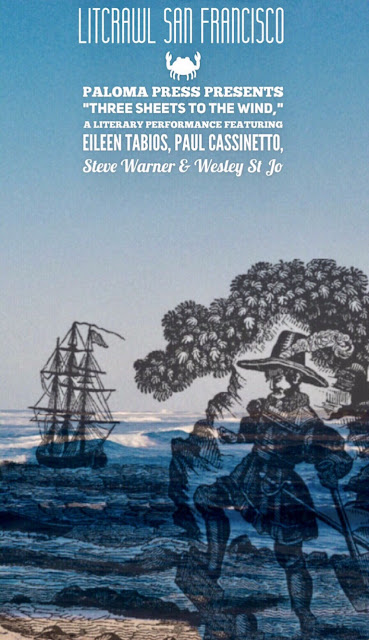 
Paloma Press presents “THREE SHEETS TO THE WIND,” a literary performance featuring Eileen Tabios, Paul Cassinetto, Steve Warner, & Wesley St Jo.
Eileen R. Tabios has released about 50 collections of poetry, fiction, essays, and experimental biographies from publishers in eight countries and cyberspace. Inventor of the poetry form “hay(na)ku,” she has been translated into eight languages. She also has edited, co-edited or conceptualized 12 anthologies of poetry, fiction and essays as well as served as editor or guest editor for various literary journals. More information is available at http://eileenrtabios.com
Paul Cassinetto is an electronic janitor by day and a poet who doesn’t know it by night.

Steve Warner is a screenwriter, actor, film director and producer. He participates every year in Write Out Loud’s Twain Fest, Storybox Theatre, and Reading For Seniors. His most recent project, “Jasmine,” won the Board Choice Award at the 2014 Eugene International Film Festival.
Wesley St. Jo is the illustrator and co-author of the poetry collection, “BLUE.” Her work has been featured in Finding God (Anvil Publishing) and 1,000 Views of ‘Girl Singing’ (Leafe Press). The real Wesley St. Jo is an adorable Maltese rescued by a real artist called Sophie.

Join us in one of the biggest literary nights of the year!

Email ThisBlogThis!Share to TwitterShare to FacebookShare to Pinterest
Labels: MANHATTAN: An Archaeology, Readings & Other Appearances