Andrew Brenza created a lovely poetry book, GOSSAMER LID, soon to be released!  Here's my (first draft) blurb for it!

Fragments, deliberate incompletions, abstract spaces, sound-based meanings, vizpo—such are not uncommon in contemporary poetry.  But Andrew Brenza brings something fresh to the terrain, and it is up in the air and even outer space.  “Scutum” sums up the strengths of this collection with radiance—“the light here / is a fine dizziness / to semblance a self on / to a towards of / another(’s) knowing” —and an attached visual element of literally connecting dots. With all of its poetic strengths, these poems also wax philosophically to show the richness of light and the various lifescapes desirous of illumination.

Meanwhile, I love indie bookstores for many reasons, but here's a favorite reason: for carrying my books!

Here's a photo taken by Leny Strobel when she visited Main Street Books in St. Helena: 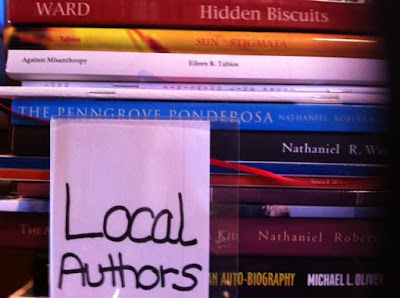 And here's a photo I took when I visited Napa Bookmine in Napa! 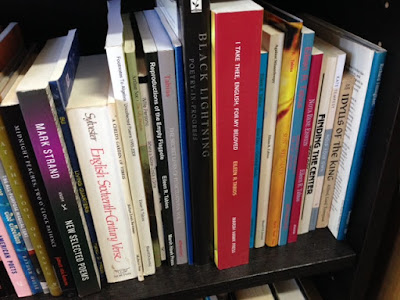 
Speaking of books, here's my latest Relished W(h)ines update of recently imbibed books and wines.  As ever, please note that in the Publications section, if you see an asterisk before the title, that means a review copy is available for Galatea Resurrects!  More info on that HERE.

URSULA OR UNIVERSITY, poetic memoir/meditation by Stephanie Young (coming late to this but glad I made it.  Outstanding. LinkedIn Poetry Recommentation #190)

*  BOUNTIFUL INSTRUCTIONS FOR ENLIGHTENMENT, poems and plays by Minal Hajratwala (a lush riot of language)

SEVEN FOR BOETTICHER & OTHER POEMS by Rodney Koeneke

*  HISTORIES OF THE FUTURE IMPERFECT, poems by Ellen Kombiyil

*  THIS IS THE HOMELAND, poems by Mary Hickman

*  ACCORDING TO DISCRETION, collaborative poems by Allen Jih and Adam Vines

LOVE AFTER THE RIOTS, poems by Juan Felipe Herrera

BRIGHT AS MIRRORS LEFT IN THE GRASS, poems by Luisa A. Igloria

I GREET YOU AT THE BEGINNING OF A GREAT CAREER: THE SELECTED CORRESPONDENCE OF LAWRENCE FERLINGHETTI and ALLEN GINSBERG 1955-1997, Editor Bill Morgan

LIT: A MEMOIR by Mary Karr

WHEN WOMEN WERE BIRDS: FIFTY-FOUR VARIATIONS ON VOICE by Terry Tempest Williams

FOR YOU MOM, FINALLY, memoir by Ruth Reichl

A MOST INCONVENIENT MARRIAGE, novel by Rebecca Jennings