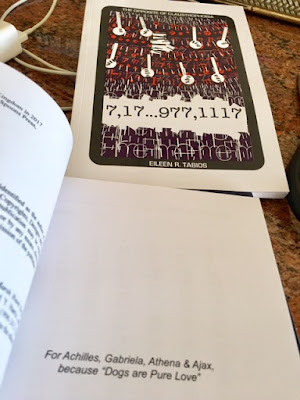 Interrupting our regular programming to share the update on Achilles, my dog who so inspired me that he even entered my poetry. After over 13 years with our family, Achilles moved on after being afflicted by cancer. After receiving the cancer diagnosis, I thought to celebrate his life on Facebook as several Friends there know of Achilles. I didn't expect the Facebook diary to be so short--I replicate it here for our friends and family:


2/22/17
Was devastated today to receive unexpected cancer diagnosis for Achilles: Visceral Hemangiosarcoma. I'll be posting a photo a day of him -- I want to celebrate his life. He's not in distress yet but we apparently don't have much time. He's here in one of my favorite photos -- with Dad who I know will be waiting for him. They share a lot of traits together, including silence and strength: 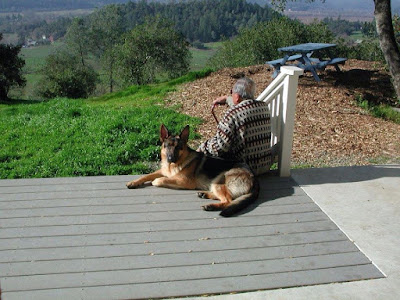 2/23/17
Nearly 13 years ago, we welcomed a 6-month-old Gabriela (right) to keep Achilles (left) in fur company. This was taken during the first day they met. They met, immediately played, and were inseparable companions until Gabriela left us 3 years ago. Flakiness Alert: Gabriela came to me in a dream a couple of days ago and said, "I miss him." 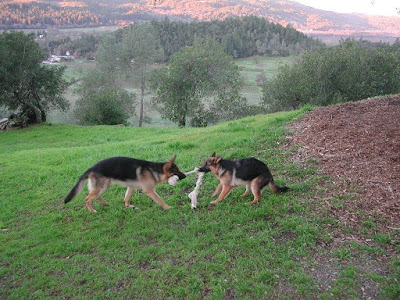 2/24/17
Achilles came to us at about 9 weeks old. Before he arrived, we had adopted two young cats including Artemis. We met Artemis shortly after she'd been dropped off at the local shelter with a litter of kittens. She'd been separated from her babies by the time we met. When Achilles came bounding into the house, it was evident that he was still a baby and, patiently, she was able to develop a relationship with our puppy. Artemis has a strong maternal instinct and I'd always imagined that she, just over a year old at the time, must have missed her babies. She became Achilles' Mom and they grew up trusting each other. The first photo (dining room) shows them shortly after they met; I remember holding my breath as I didn't know if the puppy had enough self-control to calmly sit next to her. He did, and they came to love hanging out. She loves sleeping next to him; when he was older and bigger, I'd occasionally catch her napping next to him with her tiny head pillowed on his large ear. The inner part of Achilles' ear is silky-soft--I'd want to nap on it too... 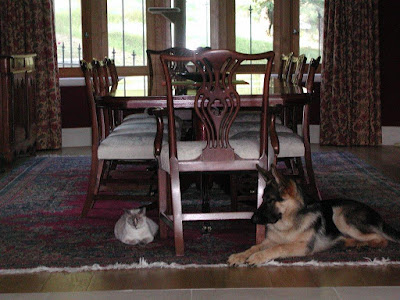 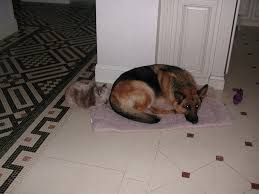 2/25/17
Achilles is ever the charmer. He is never the wallflower at parties. 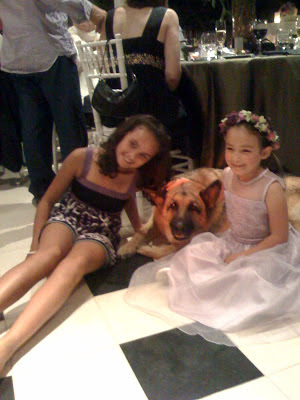 2/26/17
Achilles has always loved water.When he was a puppy, I got him a kiddie pool. He loves it when others share his love for water, hence he shared his kiddie pool with other human children. More recently, he tried to persuade Athena about the fun benefits of a swimming pool. He (& Michael) didn't manage to entice her last summer, even after bringing a ball into the water. So he shrugged (in his wisdom, he knew better than to force Athena to do anything), and went back to enjoying his swim. May Achilles always have access to water ... and any other blessings he desires. For he deserves them all. 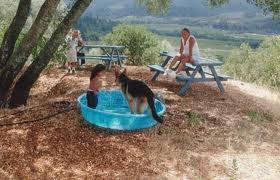 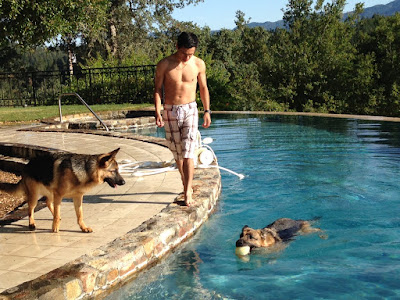 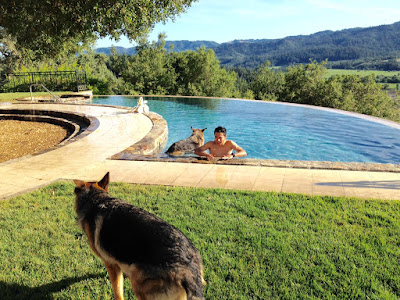 2/27/17 Morning
Dogs, of course, are a source of comfort to kids. This was Michael's first Christmas with us and Achilles (right) and our since-departed Gabriela (left) helped him feel at home. 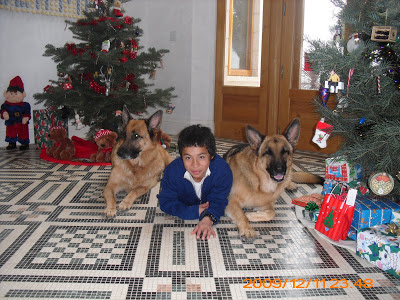 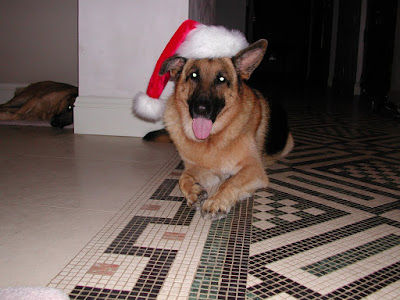 2/27/17 Evening
Not a good day for Achilles. When I went to rub his ears, I noticed he was warm. Rushed him to vet to check his temperature--and nearly smashed my dog walker's van as I hurriedly backed out of garage. He was running a fever and we got the appropriate meds. I suppose today is the start now of a series of bad days (cancer sucks). He's worth all the effort--I have never met a kinder creature than Achilles. I think you can see his kindness in this old photo, when he was all ears for a little boy who wanted someone to listen: 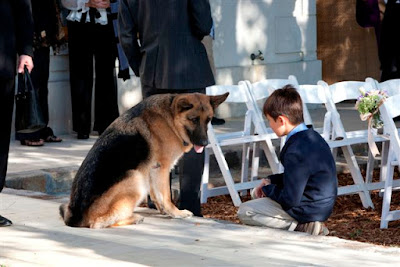 2/28/17 Morning
Centerfold material. Achilles (left) and Gabriela (right) appeared in two winery pet calendars. Here are the photos that got them in. (They might have gotten the calendar cover, but the winery owner had their own pets... ) 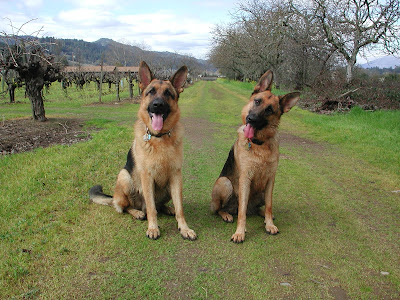 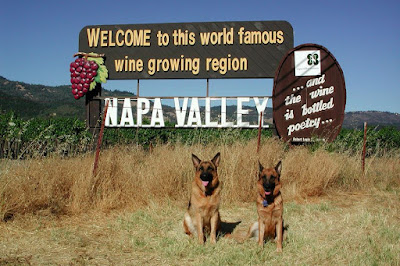 2/28/17 Afternoon
As someone who's stopped traffic catching a frisbee across the length of a football field, Achilles is a superb athlete. And since welcoming Michael to the mountain with a game of soccer, he's relished following Michael's forays into sports, from baseball to basketball to track. 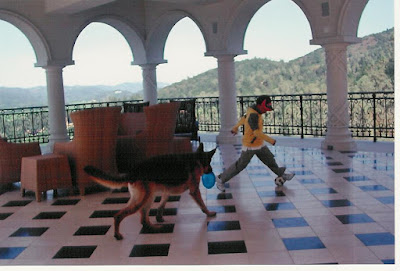 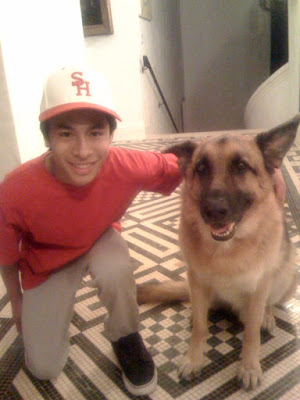 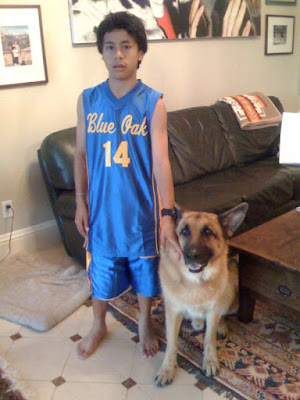 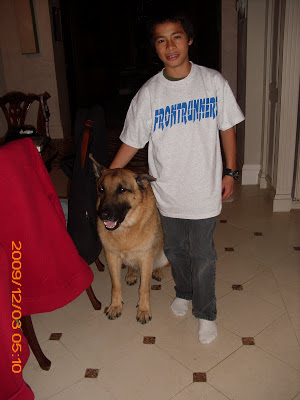 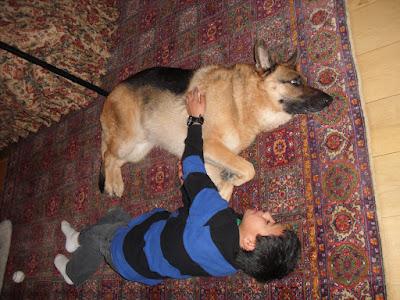 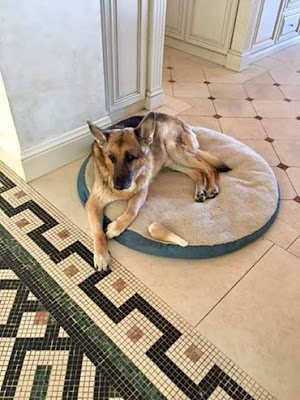 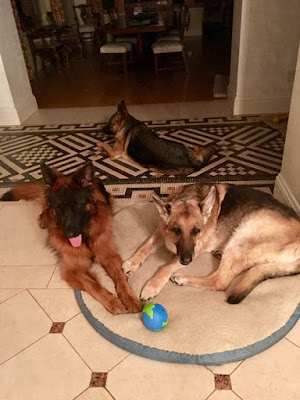 3/1/17 Afternoon
It happened so quickly. Life expires so fast. Not even a week after receiving Achilles’ cancer diagnosis, he transitioned on. Early this morning, he collapsed. I rushed him to the animal hospital where Tom, in San Francisco overnight, rushed to meet me. The cancer had spread, and the emergency room doctor—bolstered by two specialists when they realized we wouldn’t easily let go—suggested Achilles should move on. We debated for about an hour before deciding the doctors were right. We moved into a lovely room for saying our Farewell. We wanted a last chance to spend time with Achilles. While doing so, Achilles just seemed sufficiently sprightly for Tom to keep second-guessing our decision. Then his phone rang. Unexpectedly, it was Mollie who was Achilles’ favorite dog walker. Tom told her the news. She begged us to wait for her before letting Achilles go. We agreed. Realizing we had to wait at least an hour for Mollie to get to the hospital, Tom went to a nearby deli to get Achilles some steak. Achilles had been on a single-protein (in his case, trout) diet for years. Boy oh boy was he DELIGHTED to see that steak. He perked right up out of his lethargy and inhaled nearly all of the meat until I saved some for Mollie to give him. Then Mollie arrived. Oh he perked up again and they cuddled and joked around for a time. Then, Achilles looked around, and for the first time that day laid down on his side. He laid his glorious head on my right palm shielding him against the floor. That’s when we knew he was telling us he was ready to meet his sister Gabriela. It was the perfect way to shed mortality’s coils.

Later, Mollie would tell us, she had been walking at a local vineyard and felt Achilles’ presence, which was when she called Tom. When I asked where she was walking, it was at the same vineyard—same pathways—where we’d taken Achilles for his last vineyard walk this weekend. Achilles had been the last surviving dog from Mollie’s dog-walking business; when she entered the hospital room where we waited, guess what she discovered? Along one wall hangs a poster that had been her business’ logo. As for the doctor who ended up helping Achilles transition? It was a doctor who used to be at a different institution and, there, had saved Achilles’ life as a puppy 12 years ago. The circle turns, and turns...

Achilles and Gabriela were the mountain’s first two German Shepherds. There’s a path on the mountain that goes up and when it levels, that’s where I imagine the Rainbow Bridge awaits. Here he is on that path with his sister Gabriela when both were at the peak of their physical powers. The mountain’s next two German Shepherds, Athena and Ajax, also have walked on that path and, with this photo, I imagine the puppies seeing off Achilles and promising, “It’s our turn: we’ll take care of the family you love.”

We were blessed with Achilles when he was 9 weeks old. He leaves us nearly 13.5 years old. I am so grateful Achilles lived well, and transitioned well. Through my grief, and as I noticed when I left the hospital, I share: "My dear friends and family, it’s a beautiful —absolutely glorious —day." 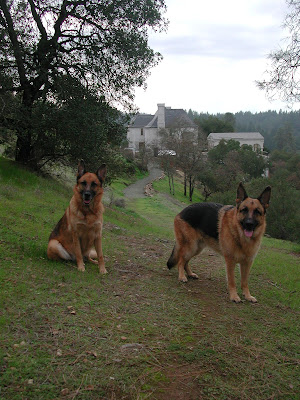 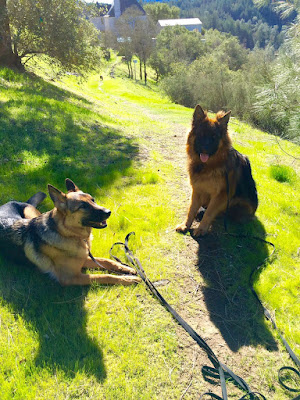 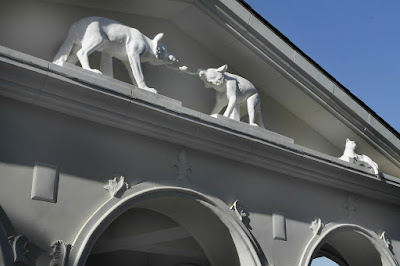 P.S.
Beyond the rainbow bridge, Achilles and Gabriela frolic, forever healthy and forever amidst vineyards in flower: 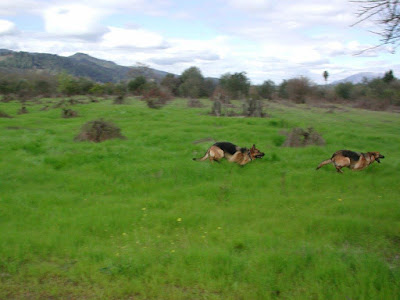 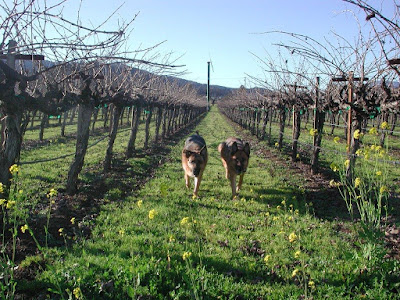 Email ThisBlogThis!Share to TwitterShare to FacebookShare to Pinterest
Labels: Achilles Diary, Furry Love, Poetry As A Way of Life